Some of my best childhood memories are from the times I got to spend up at Frank’s cabin in the summers. Although Frank was a part of all those memories – sitting around the campfire, cooking pancakes on the wood burning stove – the one the stands out the most had to do with the dunebuggy. When we were young, Frank would take Jenna, Jeremy, and me on thrilling dunebuggy rides on tracks that barely deserve the name around the cabin. As we got older, Jenna and I eagerly awaited the day when we would be allowed to try driving. Well, the day came, and I proved not to be a natural… I managed to stall the dunebuggy halfway up a hill (we all had to get out and push) and nearly blew it up in a field of daises! But throughout my disaster of a driving attempt, Frank was as kind and calm and patient as always. And though I was relegated to passenger in the future, it always reminds me of the incredible times I spent with Frank and his family up in the place he loved most. 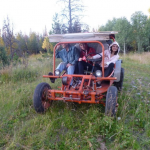 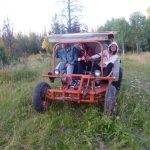